CONFLICT AND HUMANITARIAN CRISIS IN NIGERIA

The Food and Agriculture Organisation (FAO) has alerted that the food crisis might hit over 16.9 million Nigerians in 2022, as consumption is expected to slightly worsen, due to possible reduction in household, market stocks and rise in prices. They urged humanitarian and development partners to provide the much-needed interventions to save lives, sustain livelihoods and build the resilience of the at-risk populations.

Women and girls are the most vulnerable. Thousands have been abducted since the crisis began in 2009. Many more face gender-based violence, including sexual violence, trafficking, and forced survival sexin exchange for food and basic items. Heavy rains and flooding have further exacerbated the country’s food crisis, adding to the already dire humanitarian situation caused by the decade-long conflict.

About 27 million people in West Africa are suffering from hunger marking the region’s worst food crisis in a decade, international aid groups have said. Unless urgent action is taken, they said, the increase would mark “a new historic level” and an increase by more than a third during last year.

Since 2015, the number of people in need of emergency food assistance in the region – which includes Burkina Faso, Niger, Chad, Mali, and Nigeria – has nearly quadrupled, jumping from seven to 27 million. 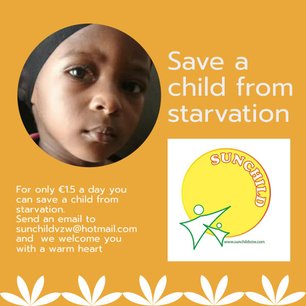 RENOVATION PROJECT OF A SCHOOL

URGENT RENOVATION OF THIS SCHOOL IS NEEDED. THE CURRENT STATE OF THE SCHOOL IS EVEN DANGEROUS FOR THE CHILDREN!

Charity costs a lot of money and in these times it is very challenging to keep our head above the water.

Save beer and soda caps and deliver them to Sunchild.

How a life can change in a blink of an eye...

Look at our report from our journey januari 2020!

You can make a change!

With your help we can build a world in which no child's oppertunities are determined by who they are or where they were born. Together we can reach every needy child.

We cherish all of our supporters ♥ Sunchild promises to use all the valueable resources provided by our donors in the most cost-effective way as possible.

GET TO KNOW US

Sunchild was founded in 2019 by Nadia Braeckmans en Dirk Van Tricht after witnessing the heartbraking, shocking lifestyle of children in Lagos, Nigeria.

These children try to survive, day by day, without any hope for their future. Even the smallest childs have learned to survive by begging.